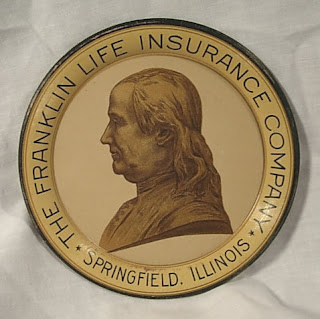 Tip trays were used as an advertising items from the late 1800's to the mid 1900's. This example advertised The Franklin Insurance Company. They usually measured between 3 and 4 inches round or could be found in retangular shapes as well. Collectors choose different industries but like lots of graphics, multi color and nice condition. Prices range on these from under $20 to several hundred depending on condition and rarity.
Posted by Stan Lourie Enterprises at 1:13 PM No comments: 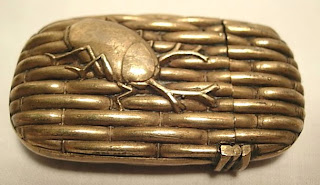 Matchsafes are pocket size containers used to hold matches to keep them dry and available for a quick light for tobacco or a quick start for a fire. What is most fascinating to me about matchsafe collecting is the thousands of different choices one can find, yet all for the same purpose. They were made of many materials, but mostly metals. They came in all shapes and sizes to fit in a pocket or vest. In the days when smoking was as common as eating advertisers used matchsafes to help sell their products and services. The matchsafe pictured dates back to the early 1900's. It was made of brass by Japanese metalsmiths. It has a hinged top for easy access and safety. The beetle is a common theme in Japanese culture. I'll post more examples in the days ahead.
Posted by Stan Lourie Enterprises at 4:01 AM No comments: 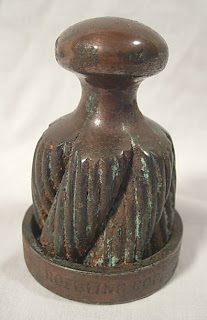 This commemorative metal paperweight is made from cable used by John A. Roebling Co., the designers and builders of the Brooklyn Bridge. It was found in an antique shop in New Jersey and sold on eBay in 2007. John Roebling began construction of the Brooklyn Bridge in 1869. Unfortunately, John never saw its completion, as he contracted tetanus at the work site and subsequently died. His son, Washington Roebling took over the helm of the company and completed the bridge in 1883. Finding this paperweight led me to learn about the Roebling family and the remarkable history of the building of the Brooklyn Bridge. The joy of antique hunting is often in the research.
Posted by Stan Lourie Enterprises at 7:28 AM 3 comments: