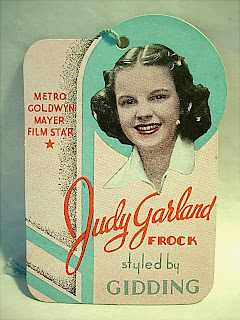 What a surprise this was. This paper dress tag was found at the bottom of a box lot bought at auction along with old toys from the 50's and 60's. It was in perfect condition and created quite a stir among ardent Judy Garland collectors. J. M. Gidding & Co. was a New York dress manufacturer that was licensed by MGM and Judy Garland to produce a dress line called Judy Garland Frocks. This paper tag would have been hung on a sleeve of one of the frocks while in the store. How many could still exist? I'd guess very few. It was listed on eBay with a starting price of $9.99. Once the collectors got wind of it the bidding was furious. It sold for $1536. to a New Zealand collector who was in possession of an original Judy Garland Frock. It made her day and left many others rather disappointed.
Posted by Stan Lourie Enterprises at 4:33 AM No comments: